This is one of my rare non-technical posts, so if you are here for the tech stuff, this won’t be what you expect :)

October 1st marked my one-year anniversary with COSMO CONSULT, so I took some time to reflect on the change I had experienced. It certainly was a big change as I had worked for a different IT company during school and university but then did my diploma1 at the same company where I started to work and then stayed for almost 15 years. In between I switched from one company in the group to another and while it meant a big change in topics and quite a step back career wise, it also meant that I packed my stuff in a box, walked two minutes up the road and was at my new office, so many things stayed the same. When I made the decision to leave and started job interviews for almost the first time in my life, that really felt weird and walking out of my old company in the same little town where I have lived almost my whole life on Monday to then start at COSMO 600 km away in Berlin on Tuesday felt even weirder. I knew literally no one short of a couple of people I had seen here and there at Dynamics conferences and kept in very loose contact. I also very rarely worked from home before and now switched to a home office 100%2. And while before my main focus was an entity of 200 people with a wider area of 500 people also being relevant, I now had to wrap my head around an organization of 1.200 people across Europe and LATAM. So overall, it was a time of quite some uncertainty and stepping out of my comfort zone3.

But I was lucky enough to be welcomed with open arms by absolutely everyone. Coming in I feared that maybe some would have wanted the job that I got or would block me for whatever reason, but that never ever happened. Everyone was willing to help, everyone was encouraging and supporting me in trying to find my way. And I very much believe that the reason for that are the core values of COSMO. On my very first day, those were presented in a way that stood out to me. It was immediately clear that this wasn’t the company story from the Marketing department but instead something very relevant for everyone. I personally am passionate about two things when looking at my job: I want to respect, value and help my colleagues and I want to work very hard on making sure that everything that I can influence is helping us to aim at being the best in the market. So when I saw that “go for excellence”, “put people in the center”, “do it with passion” and “be curious” were some of the principles for success and even more two of the three core identities are “digital leadership” and “people centricity”, I felt that I had come to the right company for me. But most of all, the leadership principle “take care of your people” hit home. I wasn’t at COSMO when this was defined, so I can’t claim any influence on it, but I hope that I might have been able to come up with something very similar if I had been asked to create it. 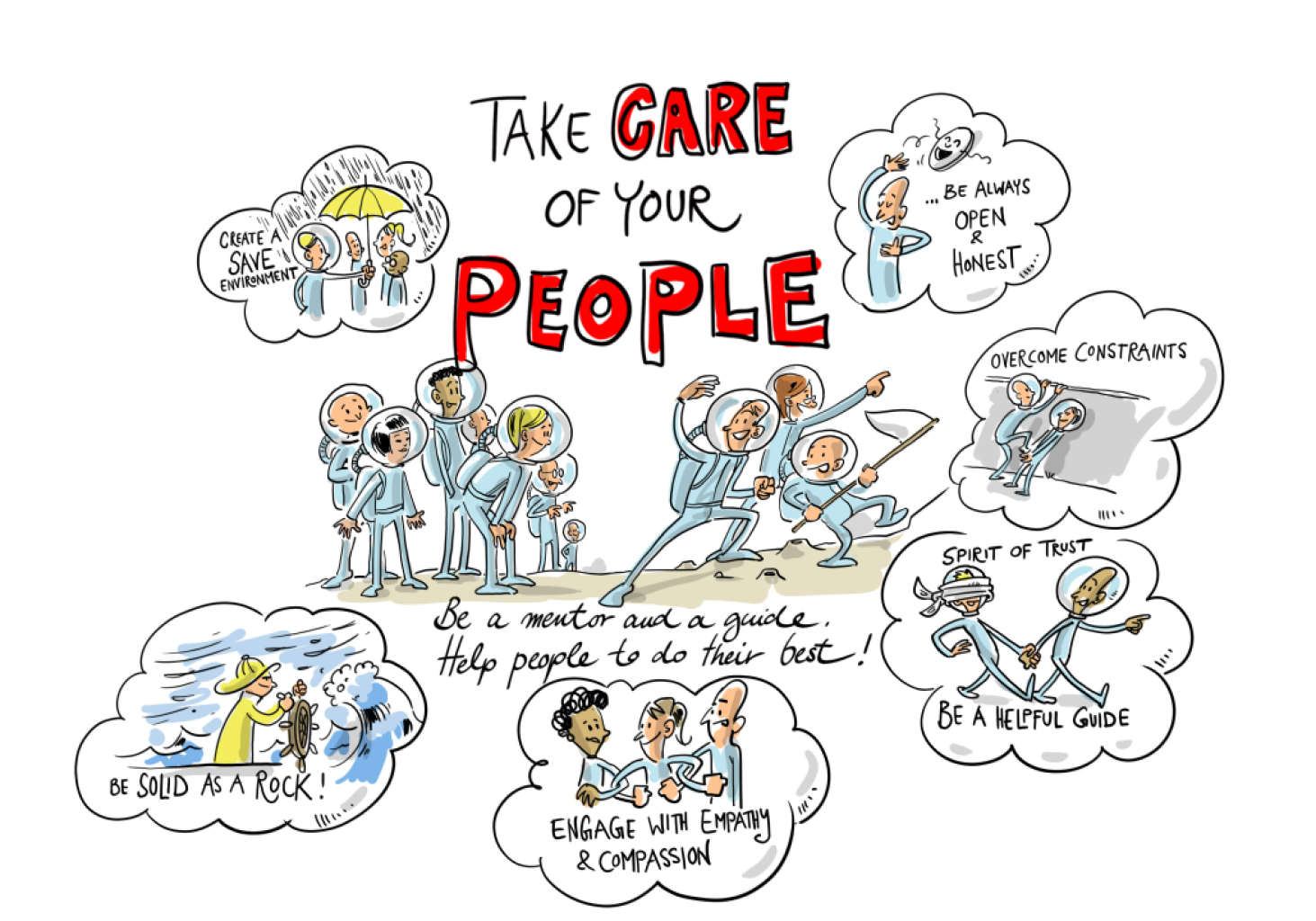 All of that would mean nothing, if it didn’t influence the every day, real life as a COSMOnaut. But that isn’t the case. Just yesterday the finals for our yearly innovation challenge started where every COSMOnaut has the chance to enter ideas, gets the needed room to develop it and then the best ones even get funding to push it further. Everyone is going through a “COSMO Code journey” to really understand the core values, principles and beliefs of the company and it’s not a presentation but really an active involvement of the participants to make sure everyone is on board. We have a team not for “Human resources4” but for “People and Organization” with amazing staff that is passionate about their job and truly cares for every COSMOnaut and their well-being. We have a Leadership Development Program that focuses not on the business side, but very much on the personal and emotional understanding and leadership on a personal level. We try new organizational models to get away from traditional hierarchical ideas, as flat as they may be. I could go on like that for a lot longer, but I want to close this with a situation which in itself isn’t all that special, but to me shows very well what COSMO is about: As probably most companies around the world, we are working on a new model of work post-COVID5. While discussing one aspect of that, I got lost in trying to find good regulations for corner cases. Fortunately one of my colleagues pulled me back by saying: “We don’t need to regulate this. We trust every COSMOnaut to take smart decisions, and we want to provide as much freedom and openness as possible.” He of course was completely right and it shows why good values do matter: When someone goes into the wrong direction, being it the new developer fresh out of school or our CEO, everyone can be reminded about our core beliefs and held accountable for adhering to them.

Is COSMO the perfect company where everything goes right and people are happy all the time? Are we a charity that only cares about the happiness of everyone involved? Of course not. We want and need to make money and things go wrong, bad decisions are taken and people aren’t treated as they should, because we are all human and make mistakes. But I am convinced it happens less often then elsewhere, because we have an amazing value system, we have great leadership from our three founders, and we have fantastic people in our regional entities and central services, in local leadership to apprentices. If I have one thing that I wish for, then we might be a bit quicker in moving towards sustainability and diversity and overall be a bit quicker in decision-making, but in true COSMO spirit, we will tackle those challenges with all our power and as a community, so what can possibly go wrong?