Since around 2013 I am using Azure DevOps or at that time Team Foundation Server. I wasn’t a huge fan in the early days, but it has gotten continuously better and is now at a point where it is in my opinion a very good all-around solution for all the key aspects of developing software, but also has the ability to be used for other scenarios. While GitHub is gaining traction as the leading source control / CI/CD platform by Microsoft, especially the Boards part is far and away better in Azure DevOps. It already brings a ton of functionality and is heavily customizable, but it also has a great extensibility model. However, getting started with extending Azure Boards can be a bit of a pain because the documentation is quite scattered, and you find a lot of out-dated information. On top of that, the tool chain is somewhat heterogeneous, which also doesn’t help. As I recently had to create a PoC extension (for time tracking in Azure DevOps, sending data directly to our ERP), I once again struggled with putting all the parts together, although I had done it a couple of times before. Because of that, I decided to put a very easy to set up and use package together, that allows you to get a working Azure DevOps web extension with only very few setup steps, targeted at the Boards part and covering the - in my experience - most relevant scenarios.

My sample has a backend, which just returns data, but helps to understand how you would access any backend, including authorization. It also of course has a frontend that will be shown to the enduser implemented in React, which shows how to listen for changes in a WorkItem, connect to the backend and make changes to the WorkItem. I wanted to avoid relying on locally installed SDKs and versions, so I put everything in a VS Code dev container. Assuming that you already have WSL2 and the VS Code remote container extension installed, this is what you need to do:

To give you an idea, this is what the result in Azure DevOps should look like after you have loaded the extension and clicked the provided button once: 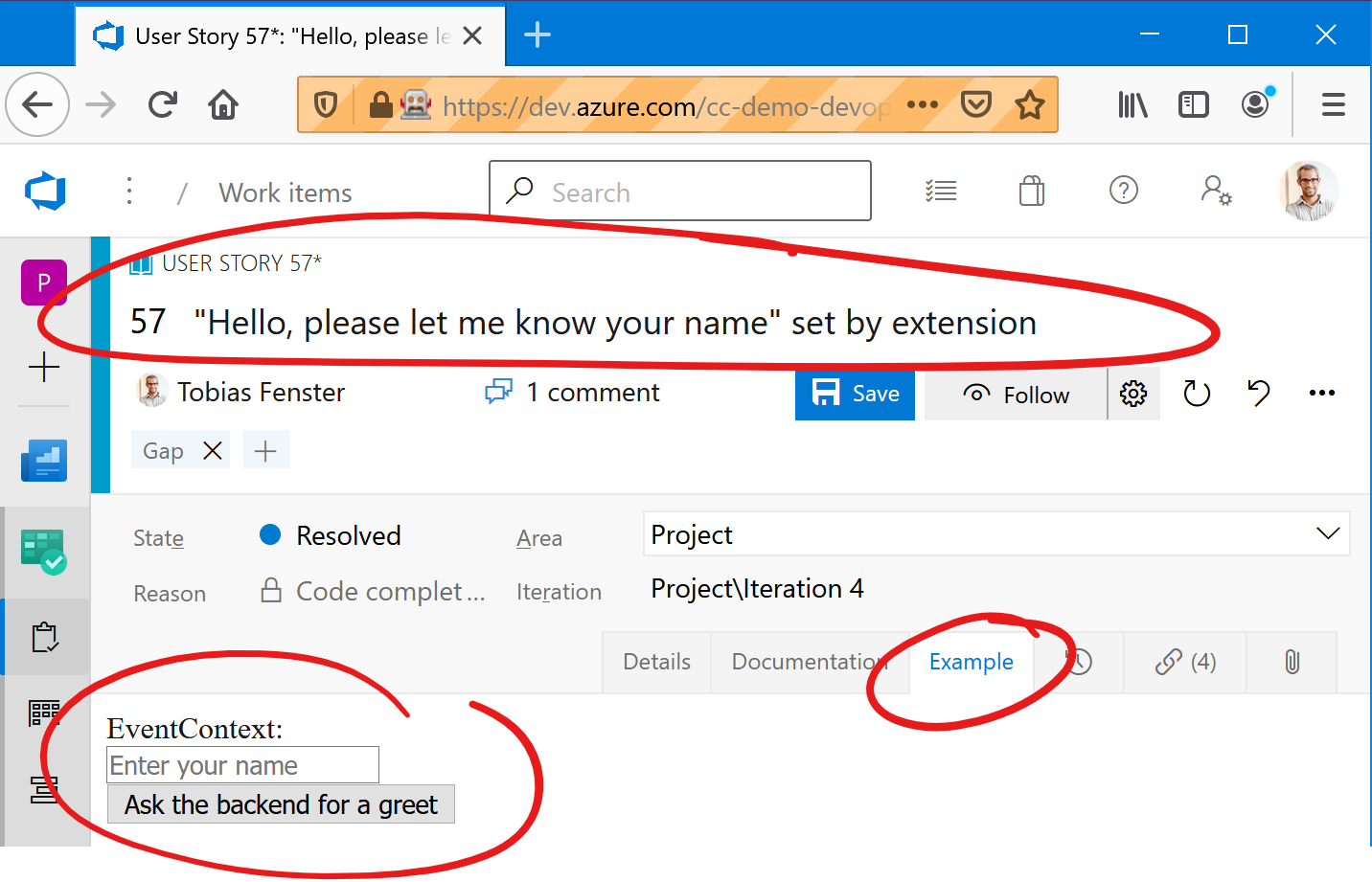 With that, you have an environment in place which you can use to develop an Azure DevOps extension with easy debugging and hot reload. Please keep in mind that this is intended only for dev and maybe PoC scenarios, not for production. But if you want only a quick and easy1 ramp up, this should be good.

The details: The dev container

As the backend of my sample is written in C# (.NET) and the frontend is React / TypeScript, I need C# and Node.js in my dev container. The standard C# (.NET) container already allows you to easily enable the addition of Node.js through a configuration setting (s. docs), so there wasn’t a lot that I needed to do. I added GitLens (because it’s amazing) and the Firefox debugger as additional extensions and a couple of npm packages. Again, to make the usage easier, I just put frontend and backend into the same workspace and the same container. If you open it, you will find three “folders” in the workspace: One for the C# backend, one for the React frontend and one for the devcontainer files. 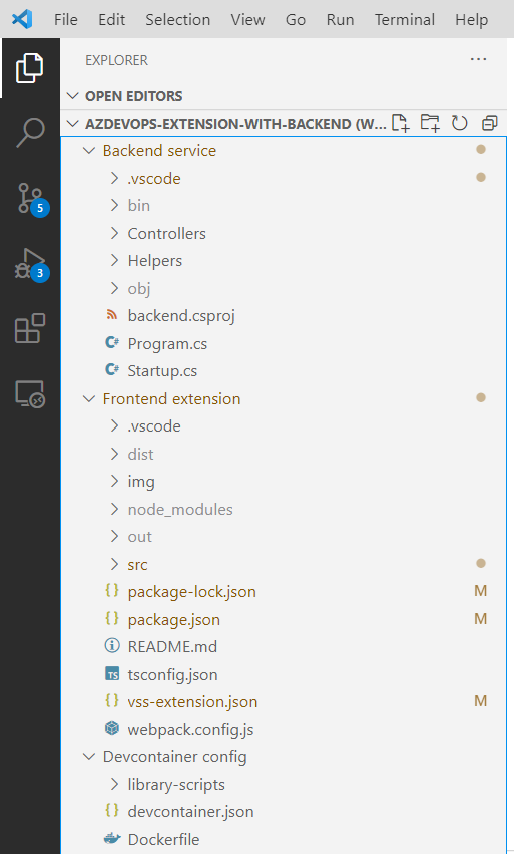 The actual root folder of the repo contains only the .gitignore file, the workspace definition file and the mandatory README.md

The details: The frontend

The frontend is built using React and if you never used that, it might be a bit confusing. In that case, I would suggest the great official beginners tutorial. The interesting parts from an Azure DevOps extension point of view are:

The rest is standard React and Typescript code. I also tried to use the azure-devops-ui package, but as on previous occasions failed at making it pick up the right styles. If you have been able to successfully use that, please let me know how…

The details: The backend

The backend is fairly trivial as it only has one controller which only has one Get method, implemented in one line

Doesn’t get a lot more simplified than that… However, the Authorization part is somewhat interesting. Basically, you use the SDK in the frontend to get an access token (see the frontend details above), which is automatically signed with a key which is unique for your extension. To validate that key, you have to use the certificate from the extension management portal (see the TL;DR above). That way, you can make sure in your backend, that a call is coming from your extension in the frontend. The source code is more or less identical to the official documentation on the topic, so I won’t go into details, but you can find it here. The sole special line is the usage of the right IssuerSigningKey when validating the token:

As I wrote in the beginning, the whole documentation around the topic of Azure DevOps extensions is somewhat scattered, but those are the sources that I used and put together for my “all-in-one” sample:

I hope this helps for making your first steps towards your own Azure DevOps web extension!